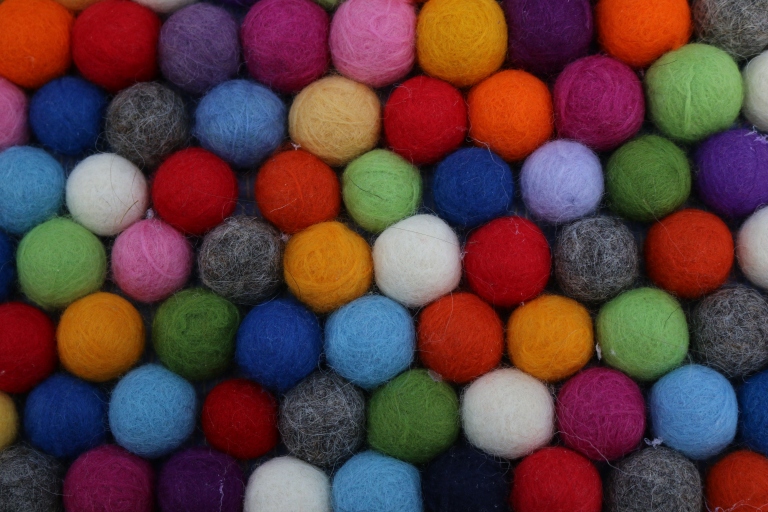 Yma dyn ni’n iawn – eto. Just when I thought we’d escaped the flu this year, it caught up with us and kept the family busy for the better (or worse) part of six weeks. In the meantime, after yet another weatherly intermission of snow and ice, spring seems to be here for good. What a relief! I don’t know about you, but what I need now are plenty of COLOURS. Lliwiau, plîs!!!!

That’s some of the colours,

the colours in Welsh.

So far it all seems very simple. Except that it’s not. Not quite. Or rather: Not always.

And that’s because some of the colours have special feminine forms and / or special plural forms. While using the feminine form with a feminine noun is always and at any time compulsory, the plural forms are not so widely used (anymore) – at least not in the spoken language.

Want the good news first? Oren, pinc, porffor and brown only have ONE form. ONE form only for masculine, feminine and plural purposes. Good news indeed.

And now for the rest of them.

There is no special feminine form, but a special plural: duon

Here are some popular black examples:

If you are a coffee drinker, you may like coffi du (black coffee), and if you like berries, you will enjoy your mwyar duon (blackberries) in the summer. For funerals you are expected to wear a siwt ddu (black suit). Siwtiau du(on) tend to be quite expensive, but you may be lucky and find a cheap one on y farchnad ddu (the black market). If you choose to wear some multicoloured coat instead, you may end up as y ddafad ddu (the black sheep) of the family.

A cath ddu (black cat) can be a bad omen, while an aderyn du (blackbird) is known to be singing in the dead of night.

“Du” is also a common part of many place names, like in Y Mynyddoedd Duon  (The Black Mountains) or Y Goedwig Ddu (The Black Forest). If you enjoy rugby, you will know Y Crysau Duon (“The Black Shirts” = The All Blacks)  from New Zealand, and if you are into mediaeval history, you will have come across  Llyfr Du Caerfyrddin (the Black Book of Camarthen) and Y Pla Du (the “Black Plague” = the Black Death).

But that’s enough of looking at the black side.

As for the feminine counterparts, I can spontaneously think of priodas wen (a white wedding), y Dylluan Wen (the Barn Owl) and the famous gafr wen wen wen  (the white white white goat in the song Cyfri’r Geifr).

Have no goats to count? Then try listening to Tecwyn Ifan’s “Y Dref Wen” (“The White Town”) and “Gwaed ar yr Eira Gwyn” (Blood on the white Snow”) or Dafydd Iwan’s “Pam fod Eira yn Wyn” (“Why snow is white”),  read Y Lon Wen (“The White Lane”) by Kate Roberts, or go to the theatre to watch a play, maybe by Cwmni’r Frân Wen (the White Crow Theatre Company).

Not forgetting to mention that Gwyn /Wyn and Gwen are very popular names!

…has a special plural and that’s llwydion.

So what would be, singularly or plurally, grey?

Llwyd is also a common name in Wales. Have you heard of the Puritan preacher and writer Morgan Llwyd (1619 – 1659)? Of “Cymdeithas Edward Llwyd”? Or indeed of the song “Lleucu Llwyd”?

For more llwyd may I suggest that you translate Michael Ende’s “Momo” into Welsh – plenty of dynion  llwyd(ion) (grey men) there!

(The confusing thing about glas is that it can also mean green, especially when used with plants (see glaswellt – grass). But I don’t really want to go into that. Keep this information in brackets, at least for the time being.)

Here are some truly blue examples:

If you’re lucky, you’re looking up into an awyr las (blue sky) today,  maybe even with llygaid gleision (blue eyes).  The “boys and girls in blue” (i.e. the police) are also fondly referred to as y Glas, whereas Cardiff City FC’s “Blue Birds” are yr Adar Gleision in Welsh. If you’re really REALLY good at singing, you could win yourself a Rhuban Glas (Blue Riband) at the Eisteddfod. Oh, and remember 1847 and the infamous  Brad y Llyfrau Gleision (Treachery of the Blue Books)?

Like most other colours, glas is also very popular in botanical or zoological names, as in  glas-y-gors (water forget-me-not) or  glas-y-dorlan (kingfisher).

Complementary colours are lliwiau cyflenwol. Like green and red. Talking of which….

There is only one general form plus a special plural, i.e. cochion.

You all know Y Ddraig Goch (the Red Dragon) – and maybe also Y Groes Goch (the Red Cross), yr Indiaid Cochion (Red Indians), cyrans cochion (red currants),  or the  robin goch (redbreast)? In football you have to leave the lawn after a cerdyn coch (red card), whereas you’d better not enter the lawn in the first place during a  rhybudd coch (red weather warning).

And apparently there are red roses by the Welsh seaside (right beside the white lilies): “Ar lan y môr mae rhosys cochion….”

Note: There is another, rather old-fashioned, word for “red” and that is rhudd. To be found in compound words like llofrudd (llaw + rhudd = “redhand”), meaning “murderer”. Or in placenames, like Rhuddlan.

There are three forms of yellow in Welsh : melyn (general and masculine), melen (feminine), and melynion (plural).

A final brainstorming in all shades of yellow:

A cerdyn melyn (yellow card) and a rhybudd melyn (yellow weather warning) are not quite as serious as their red equivalents. Gwallt melyn (yellow hair) can be very pretty, but dannedd melyn(ion) (yellow teeth) never are.  Melyn wy is egg yolk (as opposed to gwyn wy – egg white), and Y Wasg Felen is the Yellow Press. The clefyd melyn (jaundice) makes your eyes and skin go unnaturally yellow, while an Adargi Melyn (Golden Retriever) has a natural golden yellow coat.

Once you’ve mastered your basic colours and are feeling lliwgar (colourful, “colour-loving”) enough to switch to advanced mode,  you can start playing around with your blues and greens, reds and yellows and all the rest of them.

For example. If you are not quite sure about a colour, you can add -aidd, just like you would add “-ish” in English: “Greenish” is  gwyrddaidd , “yellowish” is melynaidd and so on. Get the idea?

If you want to be more specific, add a qualifier to your colour. There’s plenty of choice!:  Tywyll (dark), golau (light), llachar (bright, flashy), gloyw (shiny),…..

Possible shades of blue, for example, are glas tywyll (dark blue), glas golau (light blue), or glas llachar (bright blue). Sometimes there are other qualifiers, too. Like plants for example, as in gwyrdd olewydd (olive green).

And just like an artist on a palette, you can mix your colours in Welsh, too. Take two colours to form different one-word colour combinations. Any really. But please note: the colour at the back undergoes a soft mutation.

Here are some multicoloured equations:

Dyma ni. That’s all for now. Have a colourful day!